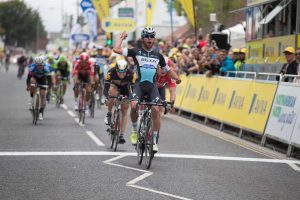 Fernando Gaviria will return to the OVO Energy Tour of Britain this September with the Quick-Step Floors team, two-years on from making a winning debut in the race.

The Colombian sprinter, who won four stages of the Giro d’Italia this Summer, took the victory at Blyth in Northumberland in 2015, which the OVO Energy Tour of Britain returns to for Stage Two on Monday 4 September.

Alongside Gaviria will be Tour de France top ten finisher Dan Martin as he makes his first racing appearance since finishing sixth overall in this year’s Tour, having raced 12 stages with two broken vertebrae.

They will be joined by Czech National Road Race Champion Zdeněk Štybar and former World Road Race Champion Philippe Gilbert, who makes his OVO Energy Tour of Britain debut having taken memorable victories in the Tour of Flanders and Amstel Gold Race classics earlier this season.

“I’m really happy to return to the Tour of Britain,” said Gaviria. “I had the best experience there two years ago riding as a stagiaire for Quick-Step Floors and immediately winning a stage there with the help of no other than Mark Cavendish. So coming back to Britain now, being part of this great team is a real honour. I like this race a lot, and for sure I will try to win a stage. We are present with a strong team and are ready to make a great race out of this! “

Commenting on his return to the race, which he has ridden on four previous occasions, Dan Martin said;

‘It is always special to ride what is effectively a home race in the Tour Britain. Always so many fans, a great atmosphere and interesting, testing course I’m excited to get back to racing after the enforced break I had after the Tour de France. We have such a strong team and with a number of sprint stages it is a great way to get back to racing but also to say thanks to the public for the support during and since the Tour de France but of course I will look for opportunities during the week.”

Stage 7 of the Tour of Britain will see riders finish in Cheltenham on Saturday 9th September, and we can’t wait to see Fernando and all of the Quick-Step Floors Team!