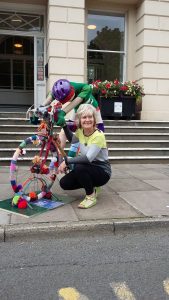 A fabulous woolly bike is now on display at the Municipal Offices on the Promenade. An inspired keen knitter from the local community yarn bombed her late husband’s bike for Bloor Homes Cheltenham Festival of Cycling featuring OVO Tour of Britain.

This knitted project was started to mark the Tour of Britain’s penultimate finish this Saturday in Cheltenham.

Sylvia Lauder, local artist, said: “Three years ago my partner Pete Fletcher died of tonsil cancer. While he was undergoing treatment I found it difficult to paint so I decided to yarn bomb the grounds of St Luke’s Church, where I have my studio in the west gallery, for Heritage Open Days September 2014.

‘’As soon as I heard that Tour of Britain was coming to Cheltenham during Heritage Open Days I decided to yarn bomb Pete’s old bike and create Eric the extraordinary knitted cyclist.

‘’The yarn has been knitted, unravelled, made into Pom-Pom’s wrapped, sewn and glued onto the bike.’’

Sylvia continued: “I have knitted many pigeons over three years so one had to be included in the work as a tribute to Cheltenham. Eric wears the OVO green winner’s jersey. The pigeon helps navigate, Eric derives brain power from a fish, on the frame, a bunch of carrots aids night time vision along with the light and a blackberry provides healthiness! My thanks go to the many who have helped with their knitting contributions.’’

Cllr Rowena Hay, cabinet member for finance, added: “Not only have we seen the wonderful art bikes pop-up around the town but now we see members of the community inspired by our great cycling event. Eric is a delightful centre point at the Municipal Offices and really is stopping people in their tracks. Please come and see him if you haven’t already!’’

The yarn-bomb bike will take pride of place on the Municipal Offices steps on Saturday 9 September.

To donate to Sylvia’s chosen charity Cancer Research UK, can do so by donating money on the day, via St Luke’s church where there are more displays of yarn bombing during heritage Open Days 7-10 September or at www.justgiving.com/Sylvia-Lauder

Eric the yarn-bombed bike has arrived at the Municipal Offices
Tagged on: 2017    OVOToB    ToB    Tour of Britain