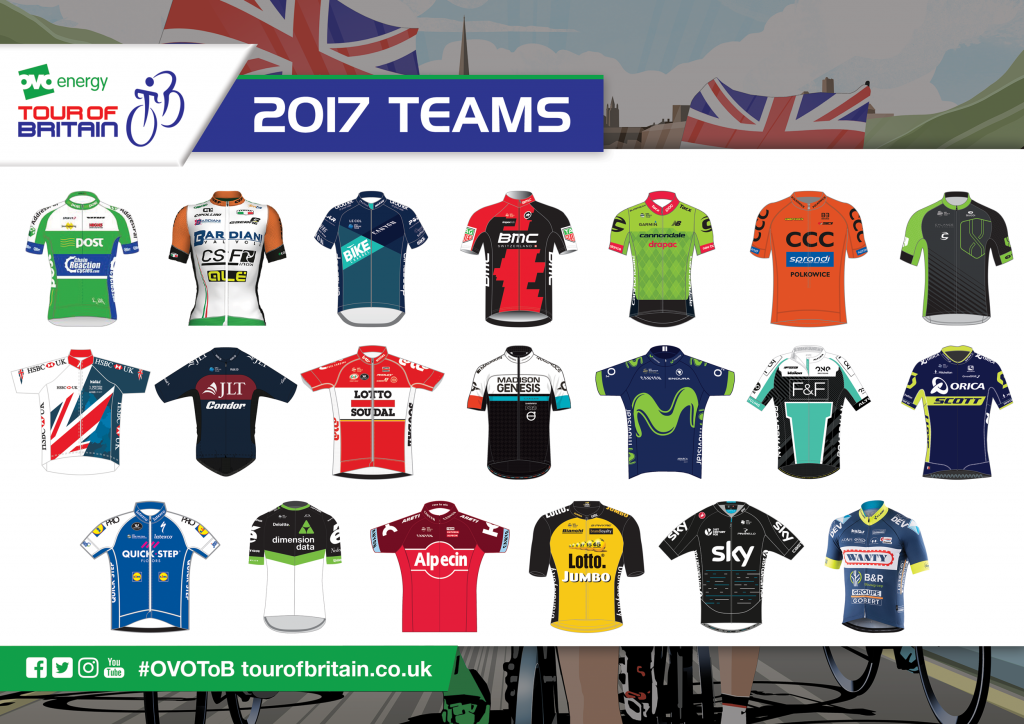 The 20 teams for the 2017 OVO Energy Tour of Britain have today (Monday 7 August) been announced, in a line-up that will feature ten UCI WorldTour teams, plus a further three squads that have competed in one of the two Grand Tours so far in 2017.

All of the top five teams in the current UCI WorldTour rankings – Quick-Step Floors; Team Sky; BMC Racing; Movistar Team and Orica Scott – will be at the OVO Energy Tour of Britain.

Returning to the OVO Energy Tour of Britain will be Team Katusha Alpecin, who have confirmed Alexander Kristoff, winner of the European Championship Road Race and Prudential RideLondon – Surrey Classic on consecutive weekends, and his teammate World Time Trial Champion Tony Martin, who won the Bristol stage last year, as part of their provisional line-up.

“The Tour of Britain is not only a perfect race in my build-up to the World Championships, I will also try to win some stages”, said Alexander Kristoff. “For me it is a return to this race after eight-years. I still have good memories of my participation in 2009. Moreover, I always perform well on British soil. I took my Olympic medal in London as well as the victory in last week’s RideLondon-Surrey Classic WorldTour race. I really look forward participating in the OVO Energy Tour of Britain.”

Alongside Kristoff the OVO Energy Tour of Britain looks set to attract the world’s top sprinters, with Team Dimension Data’s Mark Cavendish targeting the Tour to return from his Tour de France injury, and Sky’s Elia Viviani publically aiming to add to his four stage wins in the race.

Viviani’s Team Sky teammate Geraint Thomas has already vowed in interviews to race the OVO Energy Tour of Britain for the first time since 2011, with the overall finish of the Tour in his home city of Cardiff for the first time on Sunday 10 September.

“The combination of teams from all three levels of the sport, plus the presence of a Great Britain national team and the continuation of six-man teams will continue to make for open and aggressive racing. While our four domestic UCI Continental squads have worked hard to qualify for their national Tour and to have the opportunity to race against the world’s best in front of their home support.”

Chris Houghton, Managing Director, OVO Energy, said: “As title sponsor, OVO Energy is helping to bring fans and spectators across the country unparalleled access to watch the world’s best teams and riders competing on their doorsteps. We believe in powering a sustainable future that is better for everyone through the use of smart technology. Cycling is the ultimate sustainable mode of transport and an innovation-led sport – with cyclists themselves generating millions of watts of energy each day across Britain and adopting the very best technology to manage and measure their performance.”

The latter are one of four domestic UCI Continental teams to have qualified for the Tour following their performances in British events during the course of 2017. The qualification process saw teams score points in British Cycling’s Spring Cup and Grand Prix Series, plus UCI events held in the UK, with JLT Condor heading the table ahead of ONE Pro Cycling, BIKE Channel Canyon and Madison Genesis.

A provisional rider list featuring all 120-riders for the OVO Energy Tour of Britain will be published towards the end of August.

The OVO Energy Tour of Britain gets underway in Edinburgh on Sunday 3 September, beginning from the city’s iconic Royal Mile outside St Giles’ Cathedral. Following the depart of the world’s top teams and riders in Stage One, amateur cyclists will have the chance to ride around Edinburgh on traffic-free roads in the HSBC UK City Ride.

Spectators are encouraged to register in advance for their free place, by clicking here.

Jonny Clay, British Cycling’s director of cycling, said: “This stellar line-up of riders again reinforces the regard in which the OVO Energy Tour of Britain is held among the world’s best riders and teams. We are extremely proud that, yet again, some of the most recognisable faces in our sport will be racing on British roads, inspiring the next generation of cyclists.

“This year, that inspiration to participation message is taken a step further with the staging of the HSBC UK City Ride in Edinburgh on the same day that the Tour departs the city. Giving people the opportunity to ride on traffic-free streets and also watch the best in the world compete perfectly encapsulates our major event strategy, and we’re looking forward to seeing thousands of people line the streets of Edinburgh and the other locations on the Tour route.”

The full list of teams for the OVO Energy Tour of Britain is as follows:

OVO Energy, the UK’s top rated independent energy supplier was announced as the title sponsor of the Tour of Britain at the end of April.

Live coverage of the OVO Energy Tour of Britain will be shown on ITV4 and Eurosport in the UK, with both channels also screening daily highlights of the action.

Teams announced for the OVO Energy Tour of Britain
Tagged on: 2017