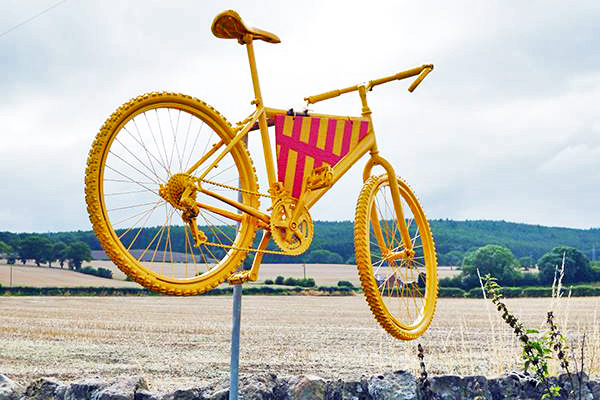 Could you donate an unwanted bicycle or part to a wheelie good cause?

They are often stowed away in dark garage corners, shoved behind tired sheds or left locked up outside.

Residents are being asked to donate neglected bikes and their parts so that can be dusted off, spruced up and painted lime green as the town creates a vibrant bike trail to promote the Tour of Britain in an initiative supported by Cheltenham Business Improvement District (BID). It will all add to the festival feel on Saturday 9 September for the Cheltenham Festival of Cycling.

Cllr Rowena Hay, cabinet member for finance at Cheltenham Borough Council, says: “We are hoping for a chain reaction from Cheltenham’s residents to donate bikes of all shapes and sizes. These donations will then be decorated or designed by artists, students and a team of volunteers at The Butterfly Garden and placed around the borough.”

The bike trail initiative, organised by the council and supported by the BID, will see online maps published at cheltenhamcyclingfestival.org.uk so visitors can complete the trail.

Kevan Blackadder, BID director, said: “The BID is delighted to have supported bringing the Tour of Britain to Cheltenham and we wanted to add an element of fun with the bike trail. When the Tour de France went to Yorkshire in 2014, they “Turned Yorkshire Yellow” with yellow bikes all over the county. Let’s turn Cheltenham lime green and promote the Tour and cycling at the same time. Visitors and residents alike will be able to tour the town by following the bikes.”

Tracey Crews, director responsible for the cycling festival at Cheltenham Borough Council continued: “I hope residents will be inspired to continue to support the Cheltenham Festival of Cycling on Saturday 9 September, and dig out their unused or rusty bike or spare wheel and donate it to a great cause where it can be upcycled and transformed into something for all to enjoy”.

Sharp eyed Cheltonians and visitors will be able to spot bikes painted in the lime green paint which was kindly donated by B&Q.

Anna MacRae, deputy manager at B&Q, Cheltenham said: “With such a high profile event coming to Cheltenham, we knew we had to find a way to be involved. We are really pleased to be donating this Valspar paint to support the bike trail that will be celebrated in the town.”

Anyone who has a bike of any size or spare wheels to offer is asked to drop the bikes or wheels to the Bike Hub at 278 Gloucester Road next to the Cheltenham Railway Station between 10am – 5pm Tuesday to Sunday.

The official Cheltenham Festival of Cycling is cheltenhamcyclingfestival.org.uk

Cheltenham gears up for the Tour with fun trail
Tagged on: 2017